I can't believe its half way through the year already! Time is flying so quickly, especially over the past few weeks! So without too much rambling on, let's get look back at the last few months!

April was fairly busy, but looking back it took me awhile to remember everything that happened! I really need to start keeping notes of all the events that happens in the month so I can recall things better!

First off, I started volunteering at Scope. It was a work placement I was sent on but I really enjoyed it, I made a few new friends and I loved dressing the windows and finding bargains ;). Despite leaving there in May, it has really reawakened my love for charity shops and the bargains they hold inside!

April was also the month I got my little Hamster, Rambo. He's a little cutie and the perfect new addition to my little family of pets ;). A major big event in April was my baby sister's 16th birthday! It's making me so old with all my sisters now out of school and doing things with their lives...can't I got back to days of them being little again!

As this year I turn 25, I got a letter saying I need to book my first smear test. And in April, I had it done and the results came back all fine which is good :) I was quite nervous at first, and the thought of a doctor being down 'that' area was a little embarrassing but it was pretty straight forward and over before I knew it. So if you're reaching that age and have your letter through, don't put it off it's over in a matter of seconds and is so important to get it down.

on a random note, it was also the month I dyed my hair black :P

May was a great month for two reasons...I finally got an oven and fridge meaning I could cook properly once again and start baking again.  It's so good to be able to cook a proper meal, and I've made some amazing meals (if I say so myself :p) since then...especially my lamb burgers with sweet potato wedges and my fajitas....delicious.

And I've baked some pretty tasty things since then too, cookies, an old family recipe my mum called Queen's Cake's and Minion's cupcakes for my friend's little boys birthday that went down a treat! I also spent the School holidays looking after my friend's boys and we went out on a little outing to the new exhibition at The Herbert Art Gallery,Coventry about Children's TV which is still on I think so check it out if your in the area!

and the other reason it was great, was I started a 6 week placement at a Pre-school which would hopefully lead to a full time apprenticeship. From day one I loved it there, getting used to the early mornings took awhile but it was worth it. The best I've worked in years!

June was the month of a LOT of birthdays...all within the same week or a few weeks after! May ended with the joint birthday of two close friends, my best friend from college was the following week, and two days later there was the boyfriend's best friend's birthday and then the boyfriend's birthday the day after. And a week and a bit later, another two birthdays! There was so many reasons to celebrate...presents and cakes coming out my ears!

I also spent a hell of a lot of time in Costa, catching up with my lovely friend/wifey Laura...nothing beats hot chocolate and a girly chat! I also went on a little shopping trip mid June and couldn't resist trying the new fruit Cooler flavours, this one was Strawberry & Watermelon...it was delicious!

So that's everything that happened in the last three months, I'll be back at the end of September with another update! 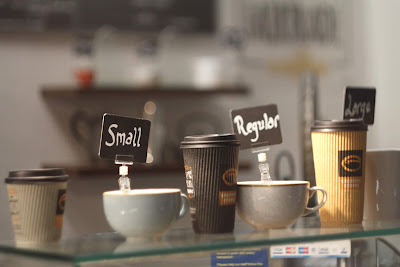